It was the evening of Feb. 23, 2013, and those roughly half a million souls watching the UFC 157 main event were in the process of experiencing a “gigantic cultural moment,” according to longtime UFC commentator Joe Rogan.

Wearing her trademark scowl, Ronda Rousey made the walk to the octagon for the first time. Waiting for her inside the cage was Liz Carmouche, a challenger on a modest two-fight winning streak who also added another first to the UFC’s historic night – the first openly gay fighter to compete in the promotion’s cage.

Funny how, just a couple years earlier, UFC President Dana White had confidently insisted that this day would never come. Now that it had finally arrived, there were few people more outwardly excited about it than he was. But it didn’t happen overnight. And who knows when (if ever) it would have happened if not for Rousey, who burst onto the MMA scene in 2011 and quickly became the focus of the women’s division.

It all started in Strikeforce, the one-time rival to the UFC that embraced women’s MMA beginning in its first year of operations. While women’s bouts had flourished on smaller stages both overseas and domestically, with organizations like Jeff Osborne’s HOOKnSHOOT, it was in Strikeforce that key divisions like women’s bantamweight really started to grow up.

But in late 2011, it was an Olympic bronze medalist named Ronda Rousey who started stealing the spotlight with her quick submission victories. In three fights as an amateur and four fights as a pro, she’d yet to be taken past the first minute of the first round. Even more notable, all her fights ended the exact same way – with an armbar. 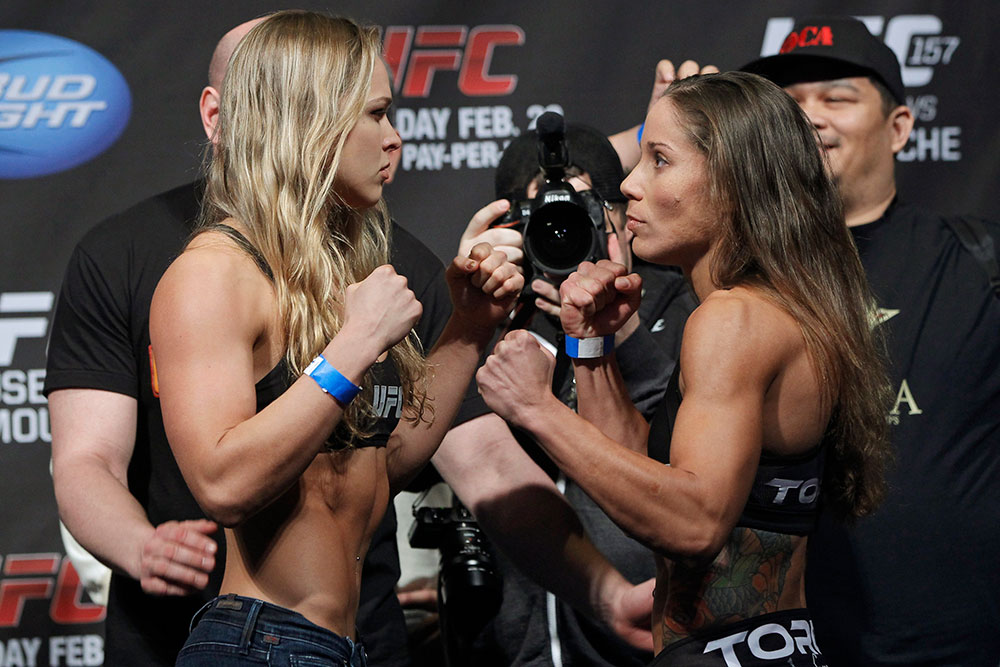 But it wasn’t just her performances inside the cage that drew people’s attention. Rousey also had a gift for the sound bite, stinging potential opponents in interviews and demanding a shot at the Strikeforce women’s bantamweight title after just two fights as a featherweight with the organization.

In addition to her good looks and natural charisma, Rousey had a certain urgency that set her apart from her peers. She wasn’t content just to win fights quickly; she wanted it all in a hurry, and she didn’t mind stepping on other people’s toes to get it.

That’s how Rousey seemingly jumped to the front of the line for a title fight against reigning Strikeforce champion Miesha Tate in 2012. While Strikeforce had been purchased by the UFC’s parent company the year before, it was still operating as its own entity when the organization and its TV partner, Showtime, went all-in on promoting the Rousey-Tate fight. The effort included slick ads showing both women transitioning from evening wear to cage attire, leading up to an intense face-off in the end.

Tate would prove to be Rousey’s toughest test, which is to say that it took Rousey until the final minute of the first round to turn her arm into a twist tie. At the time, it felt like the biggest thing to happen in women’s MMA since Carano vs. Cyborg.

Then Rousey kept defending her title while Strikeforce played out its last days before a final shutdown, until finally in December of 2012 White announced what by then seemed inevitable: Rousey was coming to the UFC, and she was bringing the women’s bantamweight division with her.

Carmouche was by no means an obvious choice as Rousey’s first opponent. She’d put herself on the WMMA map with a surprisingly strong performance in a losing effort against then-Strikeforce champion Coenen in 2011, then dropped a decision to Kaufman in her next fight. But after winning two straight in the first two Invicta FC events, she seemed like a dependable, known quantity, and one with a personal story worth telling. 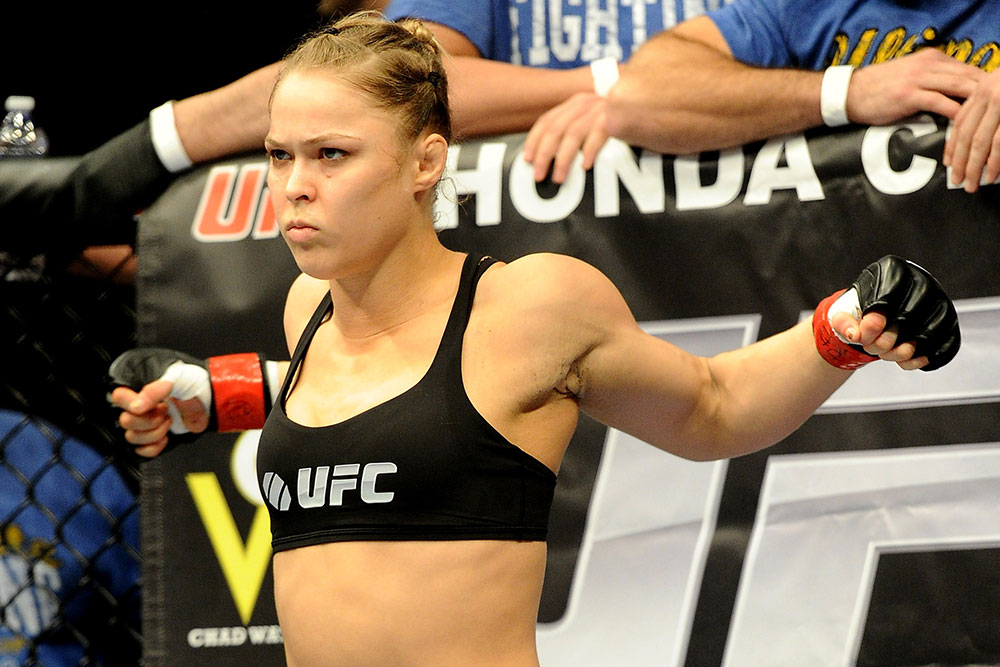 When people questioned Carmouche’s credentials as a challenger, White explained that the UFC had wanted to match Rousey up with featherweight phenom Cris Cyborg, but the bout didn’t come together.

In episodes of “UFC Primetime” leading up to UFC 157, Rousey predictably got the greater share of the spotlight, but Carmouche was there as the no-frills former Marine living a spartan existence with her girlfriend in San Diego. They may not have had a kitchen table, but they were happy, and here was Carmouche’s big chance to change their lives forever.

Of course, it wasn’t hard to see that few people wanted the bout to go that way. Rousey was the superstar driving interest in this fight. Throughout fight week in Southern California, she drew attention from mainstream media outlets, as well as crowds of fans at every possible turn.

White didn’t shy away from the fact that it was Rousey alone who convinced him to rethink his stance on women’s MMA, which left an unanswered question hanging over the impending event: What if she lost? 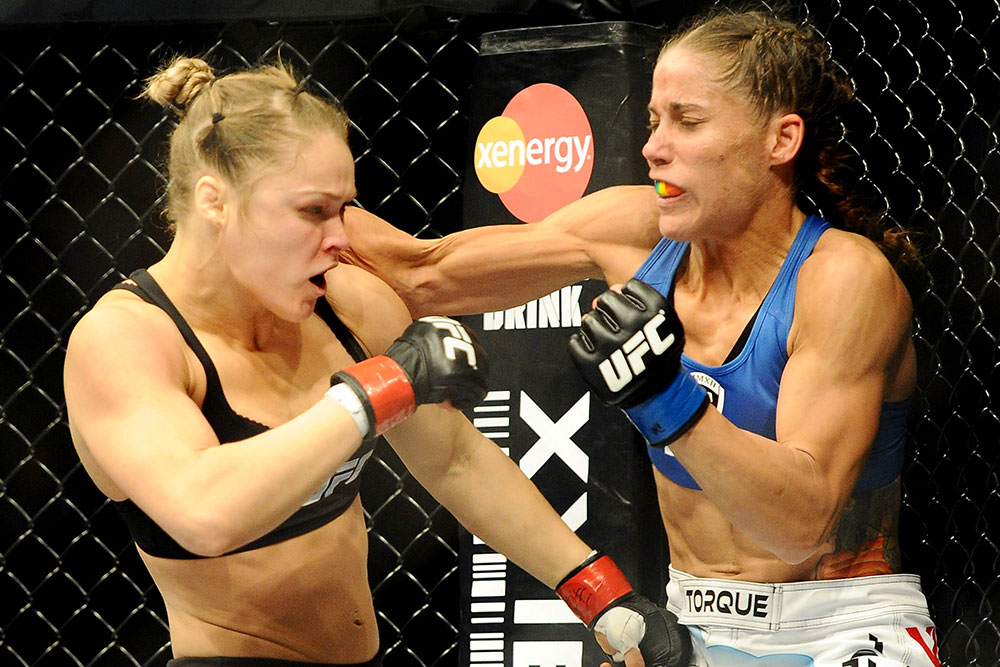 White attempted to allay those concerns at a Q&A the day before the event, telling fans that the UFC already had 10 female bantamweights under contract with plans to add five more. Still, only six fighters (Rousey, Carmouche, Tate, Cat Zingano, Sara McMann, and Alexis Davis) had been announced as UFC signees by that point. Longtime staples of the division like Kaufman and Julie Kedzie didn’t find out that their Strikeforce contracts had been absorbed until a tweet from a reporter announced it later on.

Many of those fighters were in attendance at Honda Center in Anaheim on fight night, and why wouldn’t they be? The day they’d been waiting for had finally arrived, even if it was Rousey in the spot they’d all hoped to claim for themselves.

Carmouche, the challenger, entered first, wearing the usual hodgepodge of MMA sponsors. Rousey walked second, wearing UFC branded gear (unusual in the pre-Reebok era), which only seemed to solidify the notion that the company had more invested in one of these fighters than the other.

“This is not just a moment for Ronda Rousey; this is a moment for women’s sports, period,” Rogan said during her entrance. “This is going to open the door to so many young women that never thought about doing this as a career.”

About Carmouche, Rogan noted that she had dedicated her training camp to defending the armbar and had reportedly been shutting down the training partners who tried it on her. 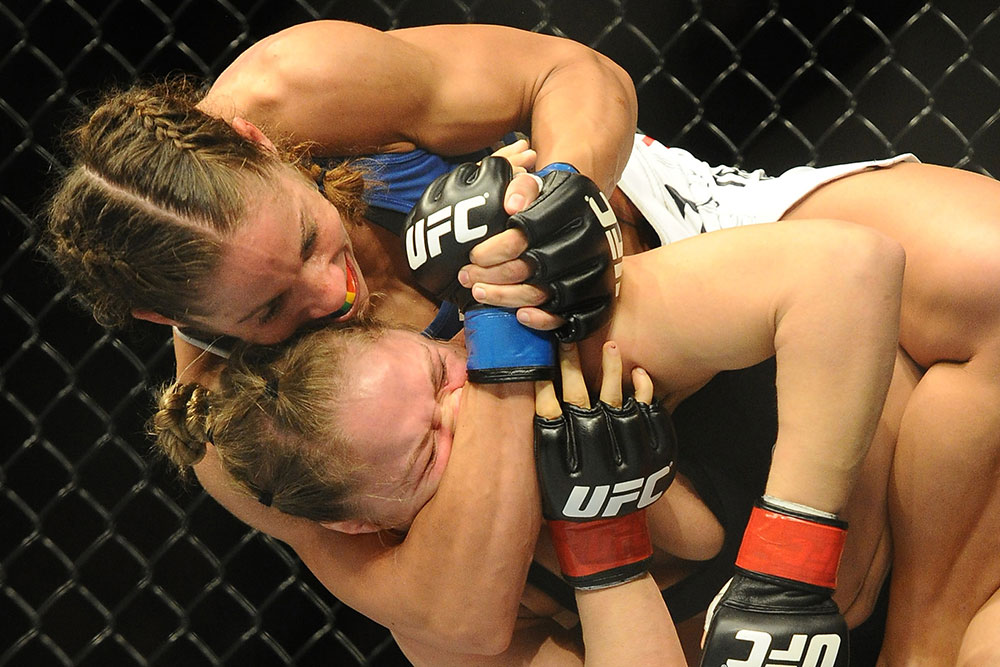 “Do (those training partners) have the skill of Ronda Rousey?” Rogan said. “Probably not, if they’re a woman.”

As soon as the fight began, Rousey did what she’d always done, charging straight across the cage and attempting to punch her way into a clinch. It wasn’t long before she’d trapped Carmouche against the fence, working a trip from a head-and-arm position to slowly drag her to the mat.

But as Rousey committed to controlling Carmouche’s head with one arm while trying to isolate a limb with the other, Carmouche managed to slip out and sit up to take Rousey’s back just as the champion got to her feet.

Not only was it a dangerous position, but it was also eerily reminiscent from a finish earlier in the night, when Urijah Faber submitted a standing Ivan Menjivar with a rear-naked choke. Now here was Carmouche, looking not unlike Faber when her hair was in braids, wrapping her forearm across Rousey’s jaw and squeezing for the finish.

Or, as Rogan put it on the UFC 157 broadcast: “She’s getting her face cranked!” 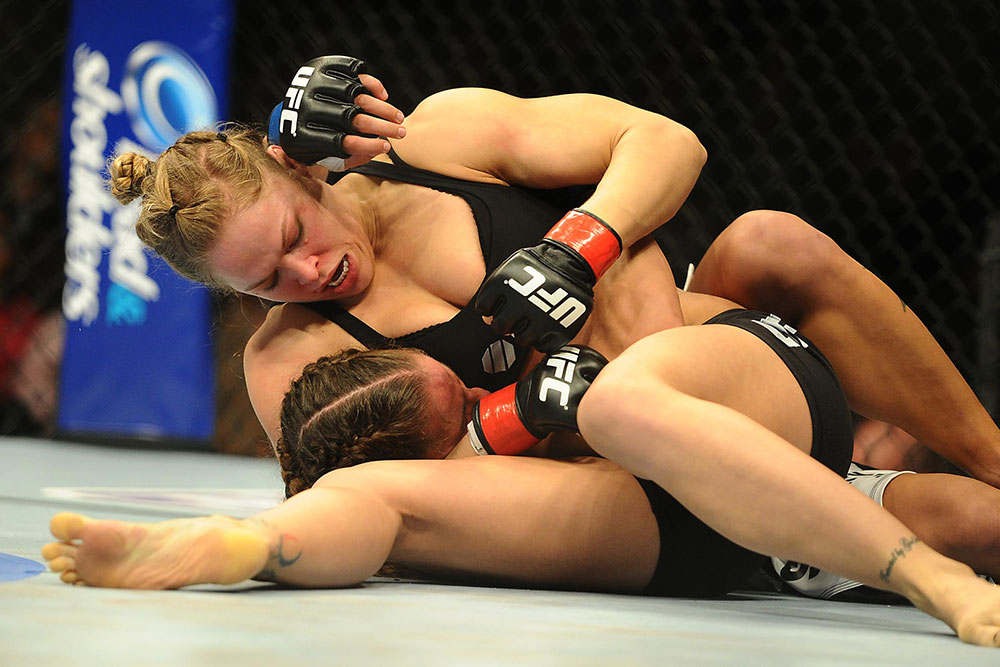 But Rousey stayed calm and soon she was out. She fought off the hooks and dumped Carmouche to her back, pausing a moment to adjust her UFC sports bra before stepping through Carmouche’s guard and spinning into side control.

Now Rousey was right back where she wanted to be, controlling Carmouche’s head while isolating an arm and peppering her with punches. Carmouche held tough and kept her arm close. But soon Rousey stepped over and latched on the armbar. When Carmouche stood to defend, Rousey rolled her over, then readjusted her grip and, in the final minute of the opening round, peeling off Carmouche’s defenses and extended her right arm.

Carmouche had no choice then. Like everyone else, she saw what happened to Tate when she refused to tap. She could submit and lose, or hold out and give up the use of her arm for the next few weeks – and lose anyway. Wisely, she chose the former.

It was a triumph for Rousey, albeit an expected one. But now she could stand grinning in the cage with a UFC title belt that finally felt like hers, asking Rogan in the post-fight interview, “Is this real life?”

As she fought off the choke, she explained, she was also fighting off a potential wardrobe malfunction.

“I was trying to think about my bra falling down and her on my back at the same time,” Rousey said. “So next time, bigger bra.”

When it was Carmouche’s turn to be interviewed, Rogan showed her the clip of her wrenching Rousey’s face from the back, adding, “and it looked bad – well, it looked good for you.” 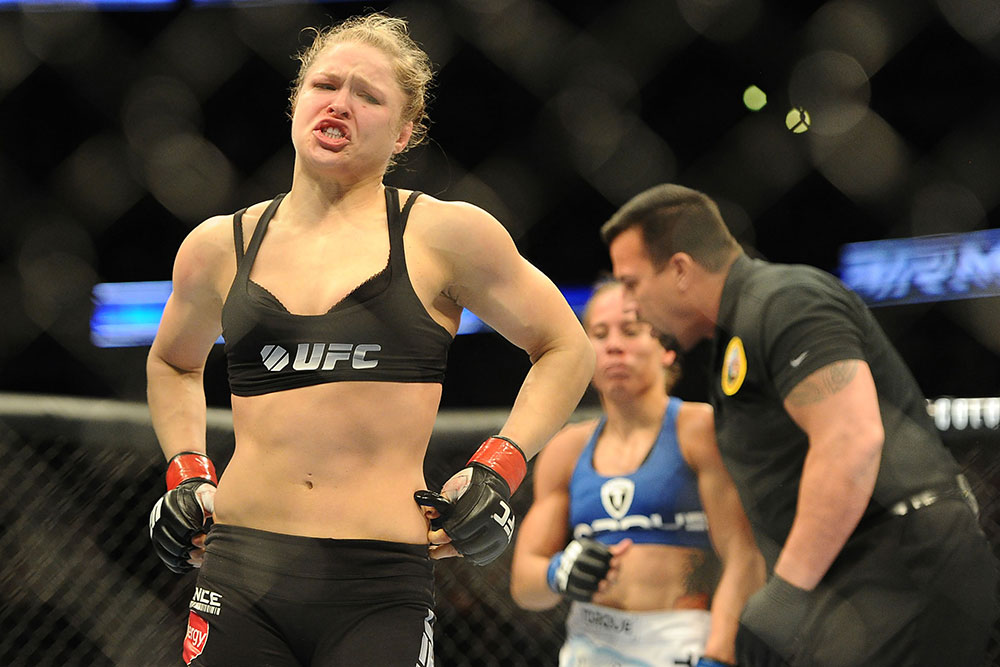 Afterwards, Carmouche would show up smiling at the post-fight press conference almost as if she’d won (or as if she’d made enough even in defeat to take some of the sting off the loss).

Rousey seemed mostly glad for the experience to be over. When she spoke, you could hear the fatigue along with the relief in her voice. She’d spent weeks carrying a heavy load, not only for the UFC but for women’s MMA in general. All those peers who’d resented her back when she was skipping the line and stealing the show? They’d end up counting on her, and she’d clearly felt the weight of their expectations.

“I felt like we really did live up to the whole hype of it,” Rousey said at the post-fight press conference. “The place was going nuts. I’m glad it was a full house. I was just honored to be a part of it. It was a special night.”

It really was. And it was also only the beginning.

“Today in MMA History” is an MMAjunkie series created in association with MMA History Today, the social media outlet dedicated to reliving “a daily journey through our sport’s history.”

John Lineker vs. Stephen Loman set for ONE on TNT 4...

Hasenhuttl thanks Southampton fans and says he won’t quit after 9-0...

Sachin Tendulkar shares a heartwarming note for Sunil Gavaskar on the...