Months of buildup. Dozens of interviews. Thousands of miles traveled and multiple countries visited on a press tour that seemed to go on forever. Then 13 seconds in the cage.

That was how the saga of Conor McGregor and Jose Aldo finally ended on Dec. 12, 2015. You couldn’t have missed the months of pre-fight hype if you tried. But the fight itself came and went in less time than it would take you to run to the kitchen and get a fresh beer out of the fridge.

Just like that, one era ended and another began. The jester had become king, and the king had become the past. After that, the featherweight division – and arguably the UFC itself – would never be quite the same.

Somehow, this all started with Dennis Siver. In January 2015, McGregor traveled to Boston to meet the stoically inoffensive German featherweight in the main event of UFC Fight Night 59.

Did this seem like it was even intended to be a serious challenge to the streaking McGregor, who’d stormed into the UFC two years prior and reeled off four straight wins while his fame snowballed into an unstoppable force? Not really.

What it seemed like was a setup. Especially after the Irishman had proven his drawing power in a win over Diego Brandao at a UFC Fight Pass-only event from Dublin, the UFC clearly wanted to be all the way in the McGregor business. So it booked him opposite Siver, a good-but-not-great featherweight who seemed to be slowing down in his mid-30s.

“This fight in Boston,” UFC President Dana White said a couple weeks prior, “if (McGregor) wins, he’s going to fight for the title.”

Of course he won. That was the whole point. But a second-round TKO of Siver didn’t make quite enough noise to please McGregor, so after the fight he leapt over the octagon fence and made a beeline for UFC featherweight champion Aldo, who was sitting at cageside.

The confrontation was brief, but tense. With beefy security types quickly intervening between the two men, McGregor leaned toward Aldo’s face with the wide-eyed stare of a madman. Aldo couldn’t stop grinning. The whole thing was just so funny, he explained later.

“He is a fool, and just kept opening his mouth,” Aldo said. “It just made me laugh.”

This would become Aldo’s standard response to McGregor’s many provocations.

At the event, he showed off a poster depicting McGregor as a court jester. “Go Joker, Go…” it read. “Make me laugh.” 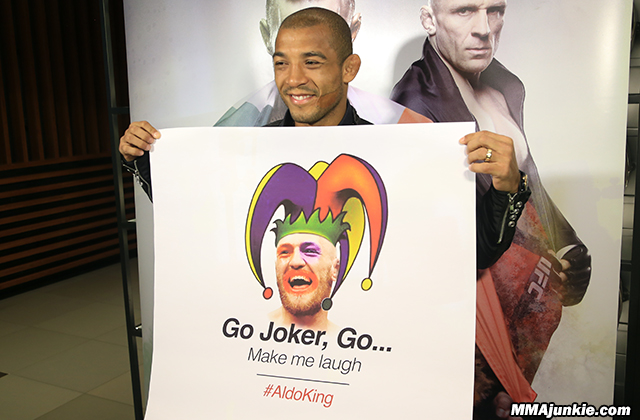 After four years as the only featherweight champion the UFC had ever known, it hardly even needed to be said that, at least for the purposes of this metaphor, Aldo was the king.

The fight was set for UFC 189 in July. To promote what it expected to be a blockbuster affair, the UFC took both fighters on a two-week media tour that traveled from Brazil to the U.S. to Ireland, all so fans could work themselves into a frenzy as the two men jawed at one another from opposite sides of a dais. 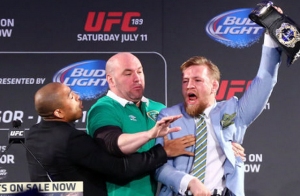 Aldo may have started out trying to dismiss McGregor’s antics as harmlessly idiotic, but by the end, he was nearly boiling over. In Dublin, McGregor reached over the podium and seized Aldo’s UFC title belt, holding it over his head as the Irish fans cheered and Dana White tried to restrain the enraged Aldo.

With that image alone, the media tour seemed to have served its purpose.

White later claimed the UFC had spent more money promoting that fight than any other in UFC history. That made it sting all the more when, a few weeks before UFC 189, Aldo withdrew with a rib injury.

The UFC president didn’t take the news well. He accused Aldo and his camp of overplaying the injury, making a bruised rib sound like a broken one. He appeared on ESPN’s “SportsCenter” alongside McGregor to criticize Aldo’s record of pulling out of title fights. Instead, White said, former title challenger Chad Mendes would step in on short notice to fight McGregor for the interim featherweight title.

“If a man is scared for his life, we cannot force him to step in and face me,” McGregor said on ESPN. “I feel he is afraid. The doctors have cleared him to fight. It’s a (rib) bruise, but he has still pulled out.”

Even with the late change of opponents, UFC 189 was an unqualified success. The UFC pulled out all the stops with its production, both on pay-per-view and in the arena, with Sinead O’Connor singing McGregor’s entrance music live inside MGM Grand Garden Arena. 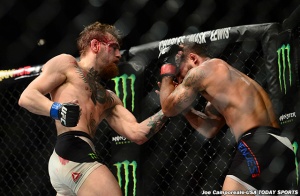 And, after a shaky first round in which he was easily taken down by Mendes and bloodied on the mat, McGregor rebounded to knock out an exhausted Mendes in the final seconds of Round 2.

Now the Irishman was the interim champ, and to the tune of more than 800,000 pay-per-view buys, according to reports. The live-gate figures also broke a U.S. record for MMA, according to UFC officials, with just north of $7 million flowing in through ticket sales.

But the fight with Mendes left some doubts. Yes, McGregor had finally defeated a strong wrestler, but one who took the fight on short notice. Plus, his takedown defense was clearly lacking. After being given such a well-manicured path to the title, was McGregor really ready for a focused and prepared champion like Aldo?

We finally got the chance to find out that December. Atop a star-studded fight card that featured Chris Weidman defending his middleweight title against Luke Rockhold (while Yoel Romero and Ronaldo Souza battled beneath them to see who had next), Aldo-McGregor was the unquestioned headliner.

Before the event, White predicted another record-breaker, saying that UFC 194 was on track to be “the biggest thing we’ve ever done.” Sure enough, live gate figures topped $10 million, according to UFC officials, breaking the U.S. record set by McGregor’s previous fight. 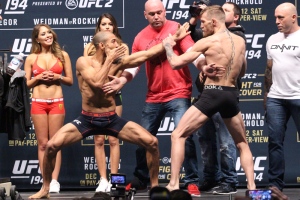 At the weigh-ins, a grinning Aldo and a skeletal McGregor had to be separated by White. The arena practically shook with the raucous cheers of the Irish fans, and all with still a day to go before the fight itself.

Asked for prediction before the fight, McGregor explained that he saw himself slipping Aldo’s right hand and coming back with his own powerful left.

“I see him KO’d inside one (round),” McGregor said.

McGregor entered first, grinning his madman’s grin as he draped himself the Irish flag. A tense and serious Aldo followed a few moments later. The longtime champion looked especially nervous as he waited in his corner, head down, swaying from side to side.

Only referee John McCarthy, standing quietly with his arms crossed, seemed capable of underplaying the magnitude of the moment. When McCarthy gave the pre-fight instructions and offered the fighters the chance to tough gloves, neither man moved.

“Conor looks extremely loose,” UFC commentator Joe Rogan said, as McGregor crouched in his corner, mouthing words that were immediately lost in the din of the crowd. “And Aldo looks like he’s feeling the pressure of this moment.”

At the signal to fight, McGregor bounded out to the center of the cage, his lead right hand extended as Aldo stalked forward. McGregor fired a straight left, and Aldo replied with a counter left hook that came up short. McGregor stabbed a kick at Aldo’s thigh, forcing him back, but only for a moment.

Then it was if Aldo had had enough. He came forward pumping his left, missing with his right and landing his left – just as he walked directly into McGregor’s stiff left hand.

The instant the punch landed, it was as if Aldo’s feet stopped working, while his forward momentum carried his upper body on ahead. He crashed to the mat, rolling onto his side as McGregor stood over him and pounded at his unguarded head with two straight left-hand hammerfists. 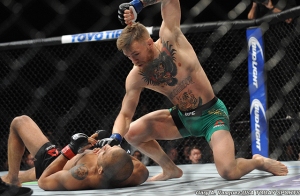 By the time McCarthy shoved him off to stop it, only 13 seconds had gone by.

“Unbelievable,” Rogan said. “The first punch he threw. Slept him.”

As Aldo was being helped to his feet, McGregor celebrated atop the cage before jumping down and jogging around the perimeter, once again draped in his flag.

Aldo could only stalk the cage, covering his face with a towel as he shook his head. When he came to the center of the cage for the official announcement, he traded a few words with McGregor before standing with his hands on his hips, staring at the mat while blood leaked from a cut on the bridge of his nose.

“He’s powerful, and he’s fast,” McGregor said of Aldo in the post-fight interview. “But precision beats power, and timing beats speed. And that’s what you saw there.”

By the time the post-fight press conference rolled around, McGregor was already talking about his next goal – the UFC lightweight title. His coaches later admitted that the cut to featherweight was a brutal one for him, and one they might prefer him never to make again. But in the immediate aftermath, McGregor was adamant about becoming – and staying – a two-division champion.

“I’ll tell you one thing that won’t be happening,” McGregor said. “If I got up to that lightweight division, there is no way in hell that I am vacating my belt. That is not happening. There will be a belt on one shoulder and a belt on the other shoulder.”

And there was, at least for a time. By then, no one was laughing at the joker anymore.

UFC 255 Aftermath: In Deiveson Figueiredo, the UFC finally has the...