Stefan Struve’s fighting career has come to an end.

The heavyweight hung up his gloves in February after competing in MMA for 16 years, including 12 under the UFC banner. Like most fighters, Struve (29-13 MMA, 13-11 UFC) had his ups and downs, but still managed to have a long tenure in the UFC and was a contender for several years – something few are able to do in their careers.

The decision to call it quits was an easy one, he said, and one that had been brewing for some time. Struve had retirement on his mind, but damage to his vestibular system, causing him impaired hearing and loss of balance, made those thoughts come to reality.

“That was the final push. But of course, I already had the issue with my heart,” Struve told MMA Junkie. “Another thing that came up last year is that I caught a viral infection or bacterial infection in my inner ear, and it damaged the vestibular system and hearing nerve.

“At first, they thought there was some crystals traveling through my ear in the vestibular system that caused the balance issues and all that. But I kept having issues. I went through a training camp and all that, and then unfortunately in my last fight, I got caught in my right ear and some of the issues came back, and after the fight they got worse.

“I went back to the hospital and it took a while to get all the tests done because we’re still in lockdown (in Holland). Then the tests showed that the vestibular system is damaged with the hearing nerve. And for me, that was it – especially now with my 6-month-old son. I want to be healthy.”

Struve has no option now but to learn how to live with the issues. He thinks they’re mild and manageable and doesn’t want to continue fighting for fear of making them worse.

“When I’m doing my everyday things and even training, I can train and I can grapple – but I don’t want to take shots to the head anymore,” Struve said. “When I’m striking and I have to react really fast, I definitely feel it. I’m having issues with it, so it was just a smart decision.

“With some fast movements with my head, I have some issues. But I’ve learned how to live with it. Unfortunately, I do have some issues with my right ear. I don’t hear as good with my right ear and I have a ringing noise that changes in volume every now and then. It’s annoying. But fortunately, I can ignore it and it’s not really a big thing. It’s unfortunate that it’s damaged that way, but it happened.” 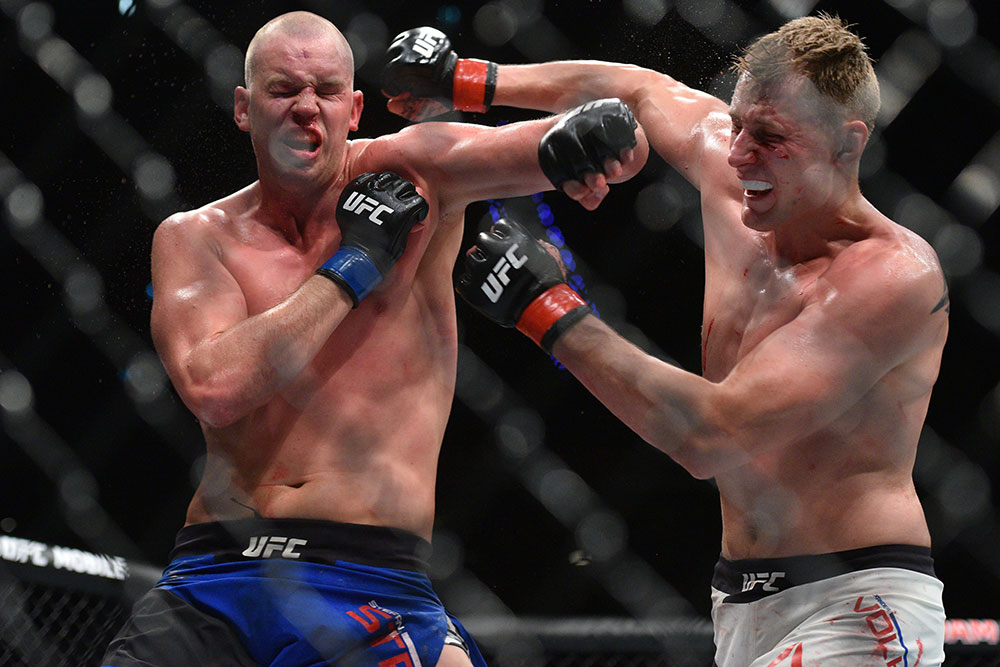 This is the second time Struve retired from MMA. The Dutch fighter walked away from the game in February 2019 and indicated he was done fighting after his submission win over Marcos Rogerio de Lima in Prague, Czech Republic. Struve earned a $50,000 “Performance of the Night” bonus from that win.

But the retirement didn’t last long. He resumed his career later that year and clocked in two more fights before this latest retirement. Struve said this time the decision is definitive and his fighting career is a thing of the past.

“I’m not going to fight again,” Struve said. “I barely train. Also, because of the lockdown, it’s been hard. If the gym was open, I’d be teaching classes and rolling in those classes and all that. But everything has been closed for a good amount of time now. The country went back into lockdown around the time of my last fight in the end of October, and we’re in March. It looks like some things are finally starting to open back up again, but there are still a lot of things closed. It’s crazy.”

Although Struve is a seasoned veteran of the fight game and has seen it all, he’s just 33. The “Skyscraper” is in the works of starting a supplement company with his friend and should be ready to launch in the near future. But beyond that, Struve is unsure of what will come next, but he’s eager to find out.

“I already had a really long career, so people are shocked that I’m only 33, you know,” Struve explained. “I still have so many things I can do and I’m figuring out what I want to do. That’s the one thing for me – I really want to do something that I enjoy again because the last couple of years of my career, I didn’t fully enjoy it as much as I did in the start. I want to find something that really gets me going again.”

Struve might not have reached UFC gold during his career, but still managed to do plenty and established himself as a force to be reckoned with at heavyweight. Struve holds notable wins over current champion Stipe Miocic, Antonio Rodrigo Nogueira, Antonio Silva, Pat Barry and others. He also won eight “Performance of the Night” bonuses and headlined two UFC events.

Struve is happy with what he was able to achieve given the limitations from his heart condition. He leaves the fight game with many memories he holds fondly.

“I wish I would’ve been able to build off the Miocic win, but after that my health issue came up, and I really struggled to come back,” Struve said. “Looking back, it was a lot harder than I thought it would be.

“But the Stipe win with the knowledge we have now, that’s a huge one. Also, on my first win where I had a huge cut on my forehead – that’s a memory that I’ll never forget. UFC coming to Holland for the first time and fighting in the co-main event and knocking out ‘Bigfoot’ Silva in 16 seconds and just the noise with the eruption of the arena, that was insane. I made some cool memories and traveled the world, so it was super cool.”

To see the full interview with Struve, check out the video below.

Djokovic down to business, Thiem loses to Berrettini