In previous editions of MMA Junkie’s annual awards, determining the “Event of the Year” usually factored in two major measuring points. First, it was likely to be a blockbuster card, one that stood out among other cards for the sheer amount of buzz surrounding the event. Second, it needed to be a card heavy on entertainment value.

For all intents and purposes, “UFC 249: Ferguson vs. Gaethje” would deserve to be in the discussion for those usual reasons no matter what year it took place. But as we all know by now, 2020 was not any other year.

UFC 249 was originally expected to take place on April 18 at Barclays Center in Brooklyn, N.Y. The main event was to feature the long-awaited showdown between reigning lightweight champion Khabib Nurmagomedov and the man he had been slated to face four times previously, former interim champ Tony Ferguson. The world, of course, had different plans.

As COVID-19 began to spread rapidly across the U.S., New York instituted a ban on large gatherings, forcing the UFC to scramble. UFC president Dana White was intent on following through with the card in the face of the challenges and said the company would hold the event behind closed doors, though he declined to reveal a location.

During the scramble to find a new venue, Nurmagomedov was forced to withdraw, citing international travel restrictions after he left the U.S. to be with his family in Dagestan.

Still early in the COVID-19 era and perhaps not fully realizing the impact the coronavirus would have on us all, the MMA world found humor in the fifth scrapping of a Nurmagomedov-Ferguson showdown being caused by a global pandemic. All was not lost, though, as human highlight reel Justin Gaethje agreed to step in and face Ferguson for an interim belt in a fight that seemed certain to deliver fireworks.

Meanwhile, White and his team made plans to host the card on tribal land at Tachi Palace Hotel & Casino in Lemoore, Calif. Due to local regulations, the card would not be under the jurisdiction of the California State Athletic Commission, a loophole that would allow the UFC to continue operations. However, outside pressure from people concerned it simply wasn’t safe to hold an MMA event as the world continued to gain an understanding of COVID-19 eventually forced the UFC’s broadcast partners at ESPN and parent company Disney to ask White to stand down.

The event was scrapped on April 9.

Nearly two weeks later, UFC officials revealed the fight card had been rescheduled. UFC 249 would take place on May 9 in Jacksonville, Fla. With Florida Gov. Ron DeSantis declaring sports an essential service, the UFC could operate with the full blessing of local authorities. 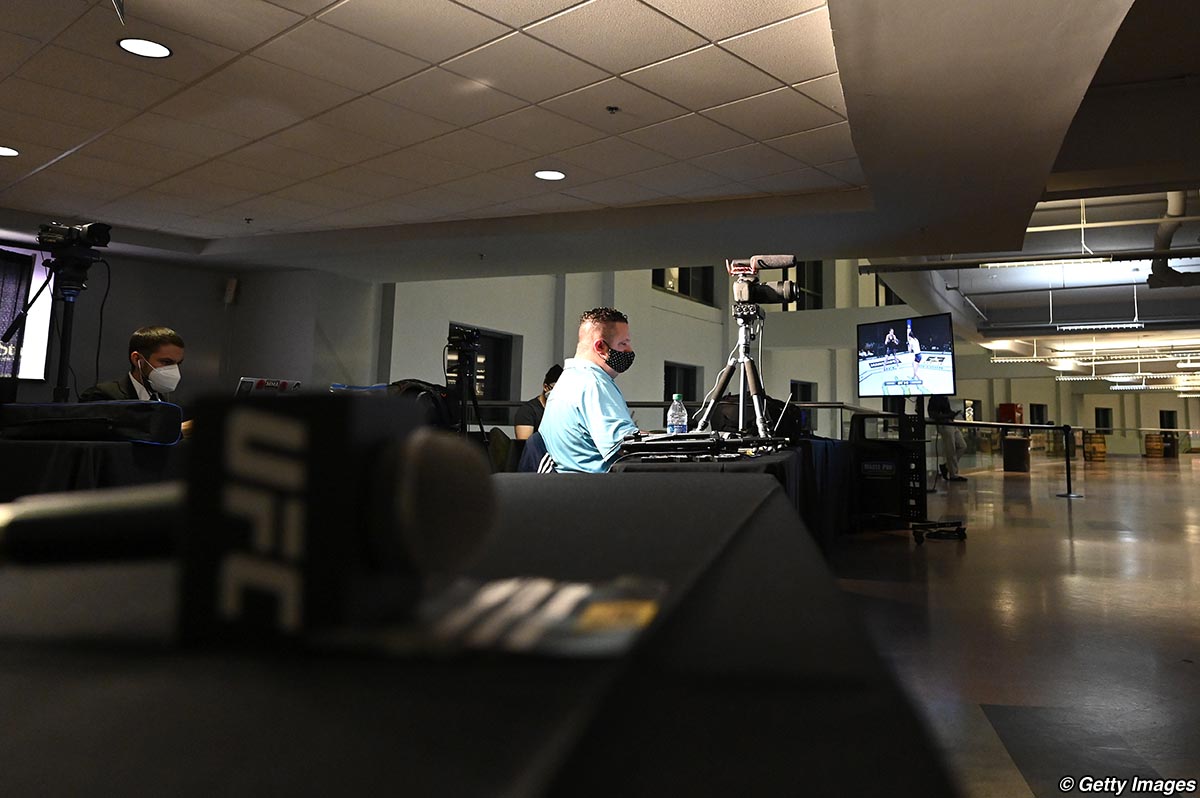 Sure, it was all to become our new normal over the remaining seven months of 2020 (and likely well into 2021), but at the time, each new day was a walk into the unknown. Every aspect of running a live sporting event had to be reimagined, and the UFC took on the daunting task of doing so well before any other professional sports league.

When we finally got to fight night, there was a unique type of anticipation. For the first time in eight weeks, the famed UFC octagon was open for business.

In a moment I’ll never forget as long as I cover the sport, Sam Alvey was the first fighter to walk to the cage that night. He ditched his traditional “Hey, Soul Sister” walkout in favor of the rousing “From Now On” from “The Greatest Showman,” and something about the poetic choice struck a nerve. Alvey slapped hands with imaginary fans in the empty VyStar Veterans Memorial Arena and pointed to sections in the stands that would normally hold cheering supporters.

Was it cheesy? Most of what Alvey does outside the cage is flavored with a hint of over-the-top humor. But something about that moment felt powerful. After months of strain and stress and wondering about every aspect of life, we were f-cking back to doing what we love, coronavirus be damned.

The card got off to a bit of a shaky start. Six of the first seven fights went to the judges, and three of those were given split-decision results, but things picked up on the main card.

Calvin Kattar’s vicious elbows devastated veteran slugger Jeremy Stephens in a thriller. Francis Ngannou’s 20-second destruction of Jairzinho Rozenstruik would have normally brought a packed arena to a fever pitch. Instead, in absolute silence, it felt more like a crime scene. Henry Cejudo shocked the world with a second-round finish of MMA legend Dominick Cruz and then shocked us all again by announcing his retirement (which, perhaps just as shockingly, still hasn’t been rescinded – yet).

Then it was time for the night’s main event.

Bruce Buffer belted out his introductions with just as much passion as he’s done with thousands of fans shouting his words right back at him. Despite the cavernous echo of the fanless venue, there was a real electricity in the air, the type that only comes when you know you have absolutely no idea what’s about to happen next.

Ferguson and Gaethje delivered on all expectations, right from the start. The pace was high. The aggression was clear. Power. Accuracy. Creativity.

Ferguson was taking damage early, but he smiled after every powerful punch scored clean. The sound of every shot was jarring – audio usually drowned out by the roar of a crowd in a fight of this magnitude. The sheer violence of the exchanges was clear, like perhaps never before.

A Ferguson uppercut at the end of the second round staggered Gaethje, but “The Highlight” told his coach, Trevor Wittman, that he was “golden” before heading back out in the third and looking as if the punch had never landed. The same could not be said for Ferguson, whose face was covered in blood streaming down from multiple lacerations. Gaethje’s right hand scored straight down the pipe, and his left hook was equally devastating on multiple occasions.

The momentum was clearly in Gaethje’s favor, even as Ferguson insisted “I feel good” in his corner at the close of the third round. “El Cucuy” refused to back down, even as we motored around the octagon on wobbly legs.

While blood was trickling out of his own mouth, as well, Gaethje was in clear control of the fight in the fifth, and he continued a tactical, vicious assault. Referee Herb Dean allowed the two warriors to display their mettle, but as the onslaught continued, he stepped in to save a damaged Ferguson at the 3:39 mark of the final frame.

Nearly 500 strikes had been thrown between the two all-action fighters.

Gaethje erupted in a series of primal screams before having the UFC’s interim lightweight title belt wrapped around his waist – though he quickly threw it on the canvas, making it clear he wanted to take the undisputed belt from Nurmagomedov.

Whether or not you believed the UFC should have been hosting events in May, there was simply no denying the greatness of both Ferguson and Gaethje and the 23 minutes and 39 seconds they allowed us all to stop thinking about COVID-19 and simply watch two of the baddest men on the planet do their thing – and with the eyes of the world upon them, with much-needed entertainment options in unbelievably short supply.

There will never be another event like UFC 249 – at least we all hope not. This was truly a part of sporting history, and it’s MMA Junkie’s 2020 “Event of the Year.”

IPL 2021: Robin Uthappa excited to play for CSK alongside MS...

Liverpool vs Man City prediction: Who will win as Klopp and...