Khetag Pliev, the fighter who had his finger almost completely severed in a Cage Fury Fighting Championships contest held earlier this month, now officially has one less loss on his record.

While the CFFC 94 bout was originally declared a TKO win for Pliev’s opponent, Devin Goodale, when the gruesome injury caused the fight to be called off at the end of the second round, the Pennsylvania State Athletic Commission has since reviewed the contest and elected to change the result.

“Upon extensive review of all the videos, talking with the referee and physicians cornering the bout and discussions held with both fighters, I have determined to change the official decision of this bout to a NO DECISION,” PSAC executive director Greg Sirb wrote in an official directive issued Friday and obtained by MMA Junkie. 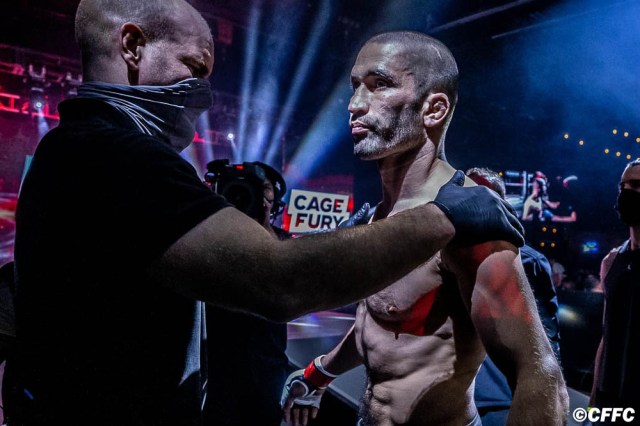 CFFC 94 took place on April 1 at 2300 Arena in Philadelphia and streamed live on UFC Fight Pass.

In one of the more bizarre incidents in recent memory, Pliev returned to his corner at the end of the second round and motioned to his cornermen that something was wrong with his left hand. As cameras zoomed in on the action, it appeared his left ring finger was completely missing.

Officials inside the cage saw exposed bone from the severed finger and immediately waved off the contest, rushing Pliev to the hospital, where the finger – which had bent completely backwards and nearly snapped off but was still lodged inside the glove – was successfully reattached.

Video review of the fight showed that during a grappling exchange in the second round, Goodale inadvertently pulled the glove over Pliev’s finger (which seemed to have been either broken or dislocated while blocking a kick earlier in the round), creating the pressure that ultimately severed the digit. While Pliev’s team had sought a disqualification win for contest, the commission ultimately felt a “no decision” was the proper result.

With the change in result, Pliev – a former Olympic wrestler and professional boxer – now stands at 5-1 in his MMA career. Goodale stands at 3-0.

Already back in training, Pliev has vowed to return to the cage as quickly as possible.

Rajeev Shukla reveals whether Rahul Dravid will fly to Australia to...

‘No weakness, no sign of injury’ – Djokovic a ‘scary’ prospect...

Rachael Ostovich: ‘This could be my last fight’ with loss at...